– a travel blog, including places to see, things to do, delicacies to eat and photos to click !! 😉

After a loo..ong break from writing blogs, I am back to blogging which is partially due to a “new year resolution” that my wife made me take (get back to travel / photo blogging) and partially due to the motivation which I derived from the ‘chubby’ effort that a beautiful couple-friend of mine has put in (click on this link to read more about their travel diaries). Also, this is my first blog-post after getting married 😉
So, coming to the context, this article is about a scenically soothing and enchanting trip to Hyderabad. It was a 5-day trip, right at the end of 2016.
Two of the main reasons of choosing Hyderabad as a travel destinations were:

After having cleared the initial steps of leave-approvals and flight booking, I consulted a bunch of friends and colleagues (and obviously the internet) to decide upon the location for hotel. Most of the junta that I consulted, ended up giving me suggestions of “where to eat” and “what to eat”, thereby making my to-do to-eat list longer-and-longer. 😛

Before I start with the hyderabad travelogue, here are some details about Hyderabad. The technical / geographical details you will find in the wiki page and how-to-reach part of the story can be found on wikitravel.

Hyderabad city is the capital of Telangana State and temporary capital of Andhra Pradesh. It’s located on the bank of Musi River. It was established in 1591 by Muhammad Quli Qutub Shah. In 1724, Mughal King Asif Jah I declared his dominion and created his own empire, known as the Nizams of Hyderabad. Hyderabad means “Haydar’s city” from haydar (lion) and abad (city).
One more story says that Muhammad Quli Qutb Shah, the founder of the city, named it “Bhagyanagar” after Bhagmati, a local dancing girl with whom he had fallen in love. She converted to Islam and adopted the title, Hyder Mahal. The city was renamed Hyderabad in her honor.
(The above stories are collated from the light-and-sound shows at Lumbini park and also at Golkonda Fort.)

Ours was a moderate duration trip, 5days/4nights. Unlike most of my travel plans, this was a rather peaceful trip, with a less-hectic schedule. That was primarily because of the fact that the trip was with our parents; and another reason being both of us wanted a rather quite one (to relax after a mega-eventful year).
Again, deviating a little from the main course, here is a small “feel factor” that I concluded at the end of the trip – When someone plans to visit this charming city, I would suggest the place to start would be the Old City! It will give a crash course on Hyderabad. In addition to being where the iconic Charminar is located, the Chowmahalla Palace, Mecca Mosque, and Purani Haveli Museum are all a stone’s throw away. Occasionally, you’ll see remnants of heritage homes built in Islamic, Rajasthani, Maharashtrian, and other architectural styles bearing testimony to Hyderabad’s centuries-old cosmopolitan culture. Walk a little farther and you will come across the Laad Bazaar. Nearby you can see people toiling away in workshops making these bangles and edible silver leaf that’s used on desserts and sweet meats.

We landed in Hyderabad airport (from Chennai) around 10am and waited for my in-laws to land from Mumbai. From there we took an Uber to our hotel which was in Secunderabad, right beside the famous Hussein Sagar Lake. When we reached the hotel, we realized that the world-famous Paradise biryani was right under our nose. The aroma was too strong to restrain and we gave in.  We barely completed the check-in formalities, dropped our luggage and rushed straight to Paradise biryani.

Having satisfied our taste buds, we took some rest. The evening was spent peacefully at the lumbini park and its brilliant light and sound show.

Before I start the details, here is a quick tip: if you are travelling in peak tourist season (like us), its advisable to book the park tickets online. On some days, the rush is unexpextedly hogh and worst case scenario being that you might have to return from the gates because the park is “house full” !! Our uber driver gave us this tip and we booked the tickets online. After reaching there, we found it to be a genuinely good tip.
So, coming back, our day-2 was reserved for Ramoji Flim city. We woke up at 7 AM and left the hotel by 8 AM. We had booked a cab for the day, but public busses are also available. After an hour of journey, we reached the main entrance of Ramoji Film city. Film city is spread across 1800 acres of land. It is the world’s largest film studio as per Guinness world record. Many films have completed shooting from the year 1996.
You need to buy package tickets from the Ticket counter or as mentioned above, book it online, beat the queue and directly enter the park. Ticket price range starts from INR 1000/- to INR 2500/- as per packages. Once you are in the park, Ramoji Film city’s bus takes you to tourist welcome center which is 7 km from Main gate. This is the starting point of you entire day tour. From this point, you can take the ride of film sets in an open bus as per your convenience (This ride starts at 9 AM).

We didn’t start the bus tour immediately, but instead enjoyed a few rides and some interesting theatre shows and other filmy-type entertainment shows.

After some rides and some shows, we had lunch. There are many restaurants and snack-bars inside the park, and the good thing being they are not too expensive at all. Next was time for bus tour. The open bus tour shows you film sets and gardens which were used in different films. You can easily connect to the movie after seeing film set. Some indoor sets are not allowed for tourists. The bus halted at Ramayana film set and at Railway station set. We clicked filmy shots at the railway station (DDLJ cliché types) and continued our tour. 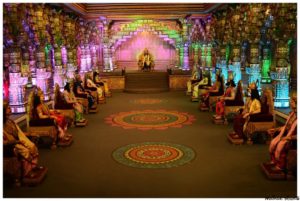 After film set, they took us to Butterfly park and Bird park. Ramoji’s bird park consists of an amazing variety of birds from all over the world. It is definitely a do-not-miss attraction from Ramoji film city, and personally I would suggest people to reserve a good amount of time for this. You might get a chance to enjoy similar rides and shows at other amusement parks, but the bird-park here is a rare thing altogether. Lots of exotic birds, colorful butterflies and much more.

Day 3 and 4: The city, it’s Delicious delicacies and its Magical Monuments

The next two days were mainly about travel through the beautiful city; which actually means only two things: Yummy Food and Stunning Monuments.
IMPortant tip: All these places are closed on different days of the week. Please click here to now which is closed when, and accordingly plan the trips.
In these two days we visited the following:
1.       Palaces and Museums
a.       Falaknuma Palace – which is actually Taj Hyderabad now!
b.      Chowmahalla Palace – one of the most beautiful palaces I have seen!
c.       Salar Jung Museum – HUGE!
d.      Sudha“cars” museum – Engineering brilliance and a rare story! (click here for more details)
2.       Historical monuments and Religious places
a.      Makkah Masjid – a remarkable piece of architecture
b.      Charminar – enough said !
c.       Golconda Fort – the most magnificent fortress
d.      Qutb Shahi Tombs – large minarets, huge domes, delicate marble designs!
e.       Birla Mandir – another magnificiant white marble Birla Mandir
3.       Others
a.       Laad bazaar / Chudi bazaar – bangles, bangles and more bangles!
b.      Shilparamam – a crafts village right across the HiTECH city!!

Now, to share something about the food.. well, I goofed up big time! I didn’t couldn’t take nay photos and I guess I can safely blame it on the food itself. All of them were so delicious that you would forget about taking photos!! All I have is the listthat I mentioned above! L

That brings us to the end of the trip and our hyderabad travelogue. Hope you like reading it. I would really appreciate comments and feedback regarding the text, the photos or absolutely anything!

Places In Pixel is a travel and photography blog which is baked inside the camera to give you flavors of our stories from faraway lands, vast stretches of sands, high mountains and beautiful cities.
Read more about our story.

Success! Thank you for subscribing!

Please check your inbox for some awesome FREEBIES!